"I Have a Big Vision": Gilbert's Story 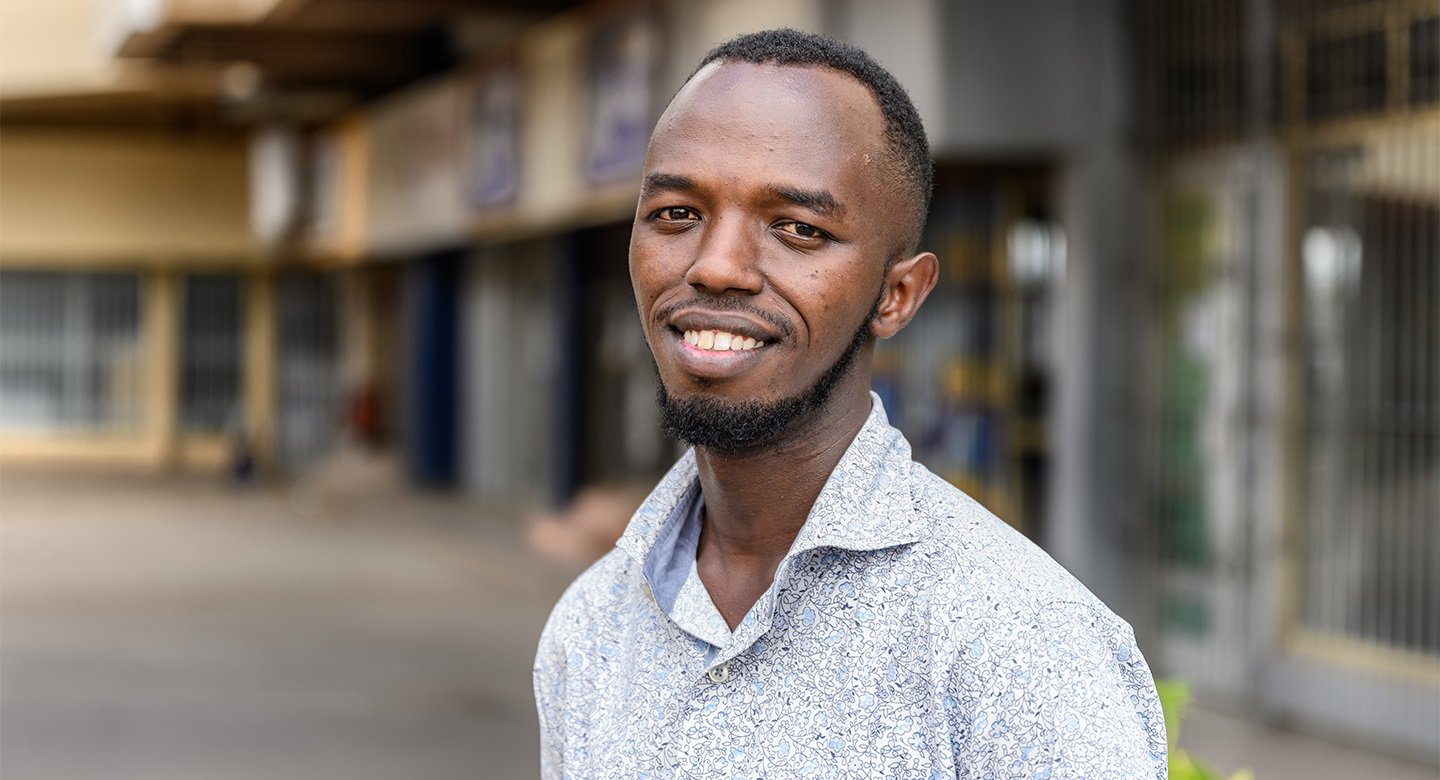 Gilbert painstakingly draws the final lines of an engineering plan for a new low-income development. He is in his last year of university for engineering, but he’s already thinking about what comes next. He’s got big plans: he wants to be a civil engineer designing and building affordable and accessible housing for people with disabilities, people whose lives have been shaped by the legacy of the 1994 Genocide against Tutsis in Rwanda, just as his own family has been. 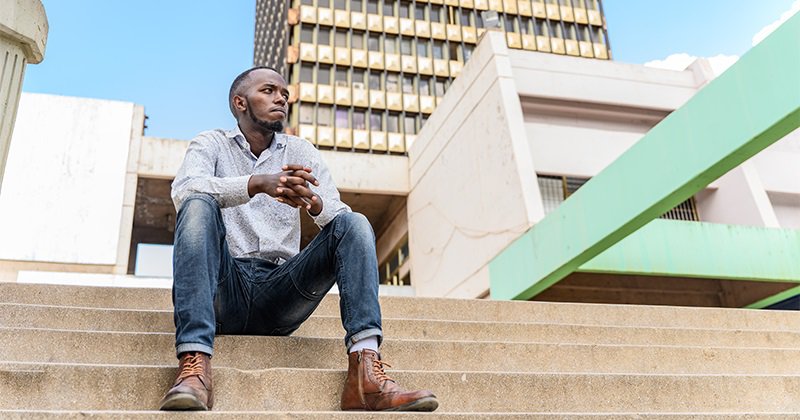 Gilbert sitting outside of his school

Gilbert’s mother is a survivor of the genocide, but she’s haunted by the memories of being attacked and injured and of being unable to take care of him. While his mother underwent treatment for mental illness, he grew up in poverty with his grandmother on the outskirts of Kigali, Rwanda’s capital. He felt embarrassed when people would ask him where his parents were, and he became a shy, lonely boy with few friends. “I grew up feeling alone in my life. I was hopeless,” he says of this time in his life.

Things became worse after he contracted otitis in his early childhood. The disease left him hard of hearing, making it difficult to communicate with other children, follow lessons in school, and feel connected to the important people in his life, like his grandmother. Gilbert struggled in school despite his grandmother’s belief that he was a bright boy who just needed the right chance.

“I was feeling lonely, unmotivated and isolated.” - Gilbert

Gilbert’s grandmother refused to give up. When he was 12, she encouraged him to join a local Rwanda Scouts program tailored for children with disabilities or who were Deaf and hard-of-hearing. The program employed coaches with disabilities or who were Deaf to work with children sharing similar challenges, positively modelling empowered and connected lives to call the children back to hope.

The Rwanda Scouts Association developed this program with the help of Right To Play, drawing on our expertise in using play-based methods to enhance the quality of education children with physical or intellectual disabilities receive. Games, creative expression and other forms of play help children discover, understand and develop their own abilities, instead of defining themselves by what they cannot do. Given even the most basic tools, like appropriate teaching techniques and encouragement, these children can rise above barriers to complete their education successfully. 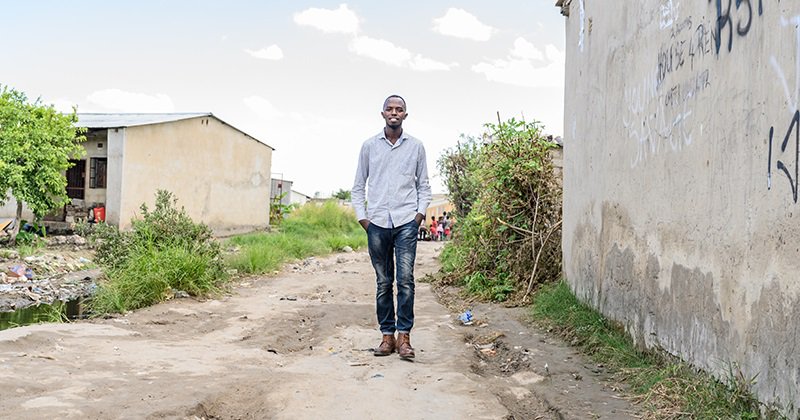 Gilbert walking around the neighbourhood he grew up in

Gilbert flourished in the program. He connected strongly with his coach, Nyandwi, who was physically disabled, and started to feel less isolated. “I admired his courage and wanted to imitate it,” Gilbert says. The games he played with other children strengthened his ability to communicate using visual cues, timing, and other techniques to supplement speech. After each game, they would discuss what they had learned from it, which gave Gilbert the chance to speak up and express himself. Boosting his confidence helped too – he was no longer afraid to ask someone to repeat themselves or to speak louder.

He experimented with other forms of expressing himself too, and in the process, Gilbert discovered that he had an aptitude for drawing. Many people like to sketch or paint, but Gilbert enjoyed the precise and detailed work of drawing buildings. In high school, he followed up on his interests in draftsmanship by studying construction, sciences and technology, and much as his grandmother had always believed he could be, he turned out to be an academic star.

“In secondary school, I was already confident. I was leading the educational games and drama skits using the experience I got from Right To Play.” - Gilbert

“Right To Play activities motivated me to chase my passion.” Gilbert continued in Right To Play-enhanced programs until he was 17 and finishing high school.

“Because of my passion for studying buildings, I decided to create my path to engineering,” he says. Less than 1 in 20 students in Rwanda make it into university. Gilbert was one of them, despite the challenges he had to overcome to get there. After excelling in high school, he enrolled at a prestigious polytechnic college in Rwanda to study civil engineering. He says he uses the communication skills he learned through Right To Play every day in presentations, assignments, and team projects for school.

“The most useful lesson I learned is collaborating with others and working together. Engineering requires deep collaboration and team work. Knowing how to do this helped in my studies. I can better understand the lessons and I’m oriented to the effort and goals of my group,” he says. 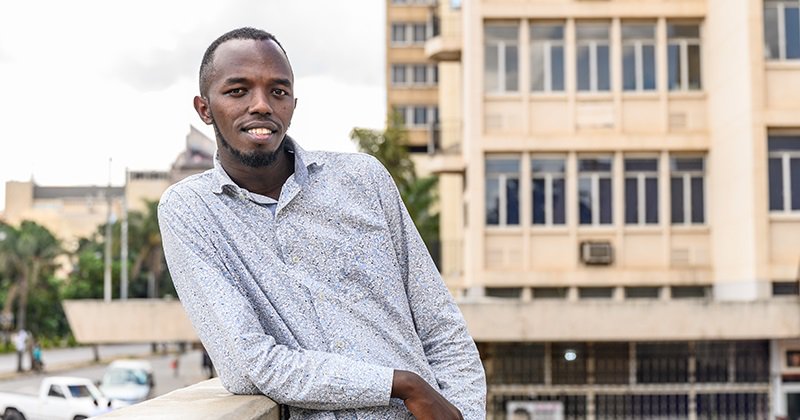 Gilbert is a civil engineer student

Now, he’s in his final year of college and ready to give back. “I want to be an entrepreneur and innovator,” Gilbert says. He’s dreaming of opening his own engineering firm once he graduates, one that will focus on affordable, accessible and environmentally-friendly housing for families like his.

“I have hope that my future will be better than my background life. I have hope for the future because what I did is great already. The dreams I have are to change the history of my parents and my family, and for myself to shine and share the knowledge that I know.”